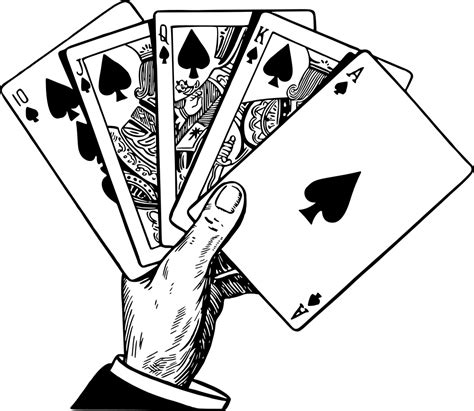 A royal flush is the best hand you can make in a no-limit holdem poker game. You won’t always get paid when you make a royal, considering it is such a strong holding on a board that is likely to scare most opponents. In this hand, I am playing day one of a poker tournament at the Wynn poker room, in Las Vegas.

The first three community cards are pretty good for my hand, As Ks Qc. I have flopped a pair and a royal flush draw. I check. The big blind bets 4,500 into a pot of 9,400 and the initial raiser calls. There is now 18,400 in the middle and action is on me. I raise to 18,000. The big blind folds his hand, the under the gun player thinks for a few moments and, after asking how many chips I have remaining, moves all in. I call all in with my royal flush draw. My opponent rolls over Ah-Qd and the board comes Jc, 5d. I lose the pot and am eliminated.

Most people might look at this hand and say, well why did you go broke with a draw?!? Others might think nothing of this spot because I had a huge hand with a pair and a big draw! These situations can be analyzed by seeing what our percentage to win against made hands is:

Against a made range of sets (A-A, K-K, Q-Q), two pairs (A-K, A-Q, K-Q), and straights (J-To, J-T suited) we are 42.7% to win the hand. The beauty of playing our hand aggressively, when deeper stacked, is that we can apply a ton of pressure to the sets and two pair hands. My plan was to raise the flop and then move all in on any turn card if someone called my raise. At that point, the pot would have been 45,400 and I would be moving all in for about 40,000. If we all had more chips, I could apply maximum pressure to non-nut hands by raising the flop, betting the turn substantially, and moving all in on the river if unimproved or if I made my hand. This would apply a lot of tension to two pair hands or sets, since I am representing the straight.

It is unlikely that the big blind would lead into two players after flopping the nuts, and the initial raiser would likely raise with the nuts on the flop some percentage of the time. So in this exact scenario, we seem to be the player that most likely flopped the straight. It also helps that I have a jack in my hand, which removes some combinations from the other two players for having J-T themselves.

For all of these reasons, the fact that we can have the nuts more so than our opponents, and that our draw is nearly 43% against a very strong range that will continue, there is really no other way to play this hand aside from raising the flop. If someone is willing to commit their chips with two pair on the flop, they still have to fade all of our outs! If they decide to continue and see more community cards, we can continue with our aggression and maybe make them fold a better hand.

Although I didn’t make a royal flush this hand, I was content with my assault on this spot. Being on the offensive gave me the best chance to win the pot outright, and my backup plan was… well you know… just a… royal flush draw!!!

“In the past, people were born royal. Nowadays, royalty comes from what you do.” – Gianni Versace